Governor DeWine released Ohio's updated Public Health Advisory System map. New health data compiled by the Ohio Department of Health found that 38 counties currently have a very high risk of exposure and spread (Red Level 3), up from 29 counties last week. This represents the highest number of Red Level 3 counties since the launch of the advisory system in July. As of today, 92.8 percent of Ohioans are living in a county that is Red Level 3 and/or high incidence. Only 1 percent of Ohioans live in a Yellow Level 1 county.

"For my fellow Ohioans who have felt that until now this virus really did not impact their lives or their families and that they would react when the situation got really serious - I say to them that the time is now. Now is the time to take this seriously," said Governor DeWine. "We need you. We need you to be fully engaged in this battle. The virus is spreading fast and has penetrated deeply into virtually every county in the state. We all must fight back." 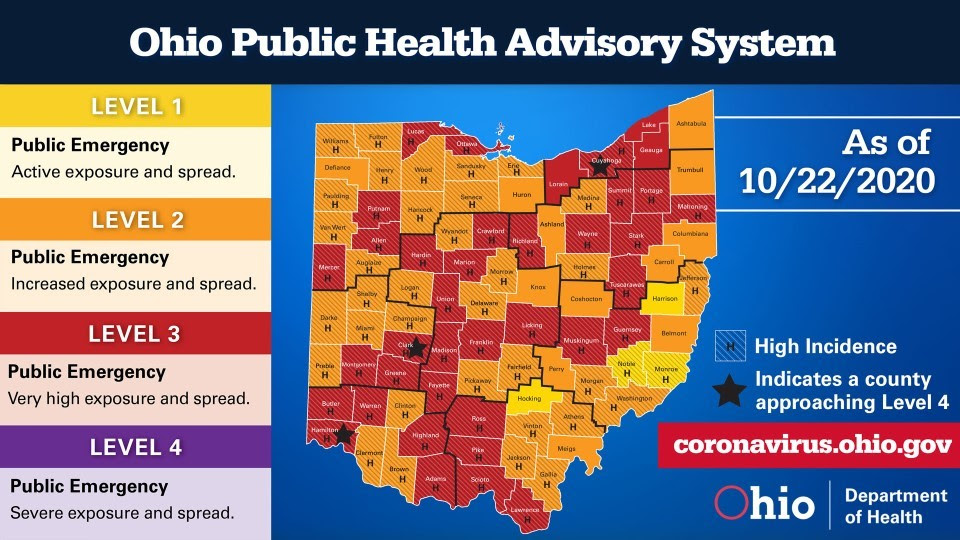 Three counties are currently on Ohio's Watch List, meaning that they are approaching Purple Level 4: Clark, Cuyahoga, and Hamilton counties.

In the past 24 hours, an additional 2,425 new COVID-19 cases have been reported, the highest number of new cases in any 24-day reporting period since the start of the pandemic. Of the top 10 days with the most newly reported cases, eight have occurred in the past nine days, and nine have occurred in October.

According to local health departments across the state, spread is primarily occurring during social and family gatherings. Many counties are also seeing a sustained increase in hospitalizations.

A county-by-county breakdown outlining the presence of COVID-19 in all of Ohio's 88 counties can be found on the Ohio Public Health Advisory System's website. 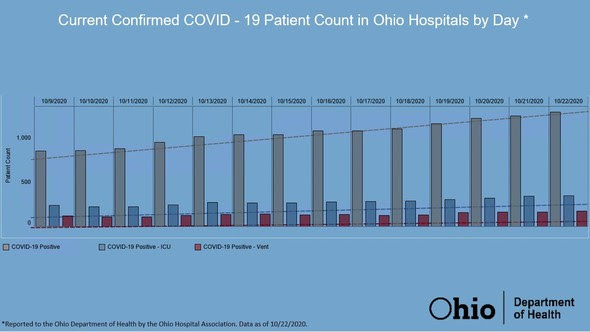 Governor DeWine unveiled a new advertisement that will begin airing across the state to serve as a visual reminder of how quickly COVID-19 can domino out of control. 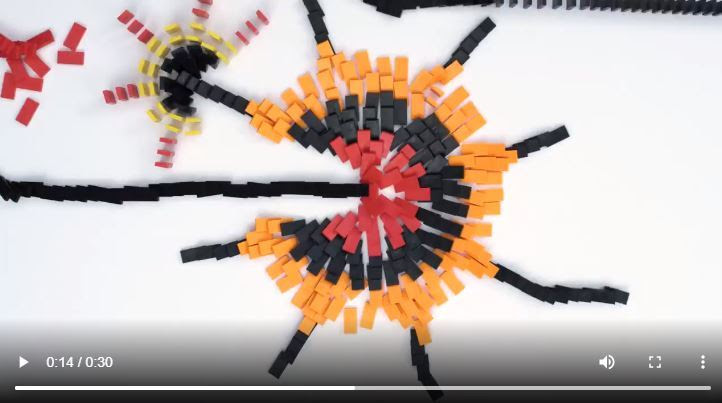 "I thought I was safe, and I was wrong. I took my mask off, and I left it off, but only for the time that I was inside the White House gates. Three days later I began to feel what I call the freight train of symptoms that happen with COVID-19 - fever, headaches, incredible body aches, chills, sweats, and it overcame me in a period of 24 hours. I had gone from feeling fine and doing my work on a Friday afternoon to by Saturday at 1:00 being admitted to the hospital and taken immediately to the intensive care unit where I stayed for the next six and a half days.

"I want everyone to understand that this is one of the most unpredictable, random, and brutal viruses you'll ever see. My message to the people of Ohio and the people of this country is that there is no place to hide from this virus if you are not going to take the common-sense steps recommended to us: wear a mask when you're outside, remain socially distant from people, no big crowds, and wash your hands frequently.

"I just want to urge as many people as I can, don't let your guard down. It's not worth it. I made a huge mistake by taking that mask off. It's something I hope no other Americans have to go through.

"One of the things I think people don't understand about this disease - because it's so random and because so little is understood - is that when you're there and going through it, the psychological effect it has on you is significant. You start to think about life and death. It's like getting beaten up from the inside out, and that combination of physical and psychological stress - it's unique in my life and pretty extraordinary.

"I know how tired everyone is of this, I felt it myself, but as tired as you are of strapping that mask on or going to the sink and washing those hands again - you will take those days in a heartbeat compared to getting this disease."

Lt. Governor Jon Husted announced the launch of the “Dayton MASKots” campaign facilitated through the Dayton Area Chamber of Commerce to slow the spread of the coronavirus while supporting Ohio sports.

This campaign challenges team mascots around the region and state to “mask up” and post a picture of their mascot with a mask on. This could be for a K-12 school, college or university, or other sports team.

Ohioans can use the hashtag #DaytonMASKots to join this effort.

The Lt. Governor also announced that Ohio recently received two RAPIDS apprenticeship rankings: number four in the U.S. for number of apprentices and number one among the 28 states with state apprenticeship systems.

More information can be found at Apprentice.Ohio.gov.